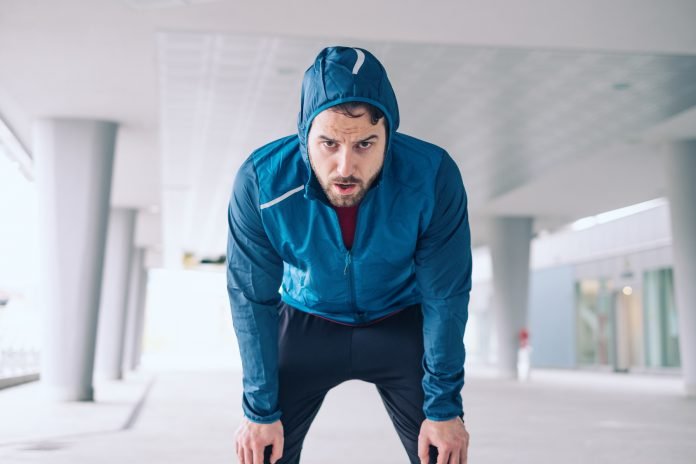 If you find yourself coughing either during or after running, then you have come to the right place.

Running-related coughing is a common annoyance that plagues many runners—recreational and elite alike.

Today’s post will explain the main causes of coughing after running while offering a few tips for treatment and prevention.

How Is Common Coughing After Running?

Coughing after a run is a common condition among runners.

In fact, it’s so common that it’s been referred to by many names such as “track hack” and “pursuer’s cough.”

In some cases, the cough may set in shortly after a session, but at other times a few minutes into your run.

The cough may strike quite frequently, but in most cases, it’s not as stubborn to persist longer than an hour nor continuously.

Though the cause may vary from one runner to runner, there are a few reasons that are most common—most of which you’ll learn more about later on.

The best way to treat and prevent this condition is to identify what may be triggering it in the first place.

Let’s dive into it.

First things first, let’s talk about coughing and the mechanism behind it.

Also known as tussis, a cough is a voluntary or involuntary act that clears the airways and throat of irritants, microbes, mucus, fluids, and other foreign particles. It’s basically a cleaning mechanism of your upper respiratory system.

When an irritating stimulates the nerves within your airways or throat, a message is sent to your brain. Then your brain commands the muscles in the chest and abdomen to push air of the lunges in order to get rid of the irritant.

For example, if you’re prone to seasonal allergies, your cough might be triggered by allergens such as dust or pollen.

In some cases, poor air quality (as we’re going to see later) might also compromise your airways and cause coughing.

The sporadic cough is normal. But there’s a number of conditions that might need medical attention.

How Long Does Runners Cough Last

Sorry I don’t have the answer for this as it depends on the cause of the cough. Some cases may only last for a few moments, whereas a severe case of running induced caugh can last up for the whole day. Keep on reading to learn more about the causes of runners caough.

Runners Cough – Why Am I Coughing After Running

Here are the most common reasons why you might be coughing during and/or after running.

If your cough while running is chronic and not caused by a sickness or a medical condition, you might be dealing with exercise-induced bronchoconstriction.

When it’s the case, your airways get briefly constricted, which can induce a cough that can last for a few minutes.

The condition causes wheezing, shortness of breath, coughing (of course), and other symptoms during and after running.

Having asthma—as well as other respiratory issues—will make you more prone to suffer from EIB.

In most cases, EIB may peak roughly 10 to 15 minutes into a workout and fades away within one hour or less. The symptoms may linger for an hour or longer if untreated.

The telling signs include

The condition may also force some people to stop exercising, which drastically lowers quality of life.

Other than preventing it in the first place, most cases of EIB can be treated with albuterol, which is a quick-acting medication that can briefly open up the airways.

If you’ve been diagnosed with EIB or asthma, you’ll probably have at least one inhaler. These inhalers aren’t only used during an attack but also as a preventative measure to reduce the risk of an attack.

That’s why most doctors would recommend using this fast-acting emergency medicine 15 to 20 minutes before running to prevent airway spasms for the upcoming hours.

Do the following to reduce your risks of EIB while running.

A warm-up is important before any run, but for those with EIB, it’s even more crucial. This allows your body to get used to physical activity and increased breathing rate, which prepares it for more strenuous exercise.

Perform at least 5 minutes of light jogging then followed by another 5 minutes of dynamic warm-up exercises, such as inchworms, leg swings, walking lunges, and air squats. For my full warm-up routine, check this guide.

Seasonal allergies such as hay fever are another common cause of coughing after running.

According to the American Lung Association, pollen is the most common springtime allergy offender.

During this period of the year, you might find yourself coughing both during your workout as well as post-run.

You may come down with symptoms such as wheezing, sneezing, and coughing after outdoor running, especially if the pollen count is high.

This is blamed on mold spores and airborne pollen that get trapped in the airways and irritate them.

If you want to avoid allergies relating to pollen through the springtime, take the following steps.

Check the pollen count before heading out the door. If the count is too high, consider hopping on the treadmill or cross-training.

Not worth the risk if you’re already prone. Luckily there’s an app to help you predict the pollen count of the day.

Stay indoors as often as possible

You should be able to comfortably run outdoor without coming down with any allergic reactions when pollen count goes down.

Craving an outdoor run but don’t want to hop on a treadmill? Consider taking an antihistamine to medicinally control your allergies.

Just keep in mind that just like any other medicine, antihistamines have side effects. The most well-known one is drowsiness, so be careful.

If you find yourself coughing up phlegm and wheezing after running in the cold, it’s likely because you’re dealing with a case of post-nasal drip.

The glands within your throat and nose constantly produce mucus to moisten the nasal membranes, expel foreign matter, and fight off infection.

Most of the time, you swallow this mucus without even realizing it.

Usually, your body produces just enough of the mucus to keep things going smoothly, but in the presence of triggers, such as sinus infections, irritants in the air, the common cold, and of course, running in cold weather, your body may start to make too much of it.

That’s why post-nasal drip may force you to clear your throat much more often, and you feel soreness in your throat, too.

Common symptoms of postnasal drip include:

Take the following measures to keep post-nasal drips while running at bay.

If you’re prone to post-nasal drip, stay inside as often as possible to stop the cough from getting worse.

If your post-run cough is triggered by postnasal drip, try using an over-the-counter (OTC) oral decongestant, guaifenesin, or antihistamine—all of which help thin the mucus.

This might be enough to thin mucus and soothe your nasal membranes.

Don’t know which one to take? Consult your doctor or pharmacist before trying any of these products. Better be safe than sorry.

Before heading out the door for a run, rinse your nasal passages with a saline solution, whether in the form of a neti pot or a bulb squeeze syringe.

This should be enough to wash irritants or allergies out of your nasal passages, which helps your body get rid of that excess junk that’s triggering the secretion of mucus. You can also turn this into a habit by doing this every night before you sleep.

Another trick to unclog your respiratory tracts is to inhale vapors or steam.

Cause Number 4 – Running In Cold Weather

With or without allergy risk, bouts of running-related coughs are much more common during the cold season than in any other season.

When you run outdoor during the cold season, you’ll be breathing air that’s drier and colder than the air in your lungs. This air causes heat loss in the lungs, resulting in shortness of breath, wheezing, and a cough while exercising.

That’s not the whole story. Research out of the National Library of Medicine has also reported that the cold air can reduce the amount of water and heat in the lung, setting the stage for a scratchy, dry cough.

To reduce your risks, do the following:

If you’re running in cold weather, consider wearing a mask or a scarf around your face. This should help moisturize the air and filter out large particles. Choose the breatheable one.

If you’re prone to coughing and it’s too cold outside, consider moving your workout indoors. A treadmill is your best friend here. Check my full guide here.

Medically known as gastroesophageal reflux is a common condition that causes a burning sensation in the chest.

The condition occurs when acids in the stomach churn up in the throat when exercising. More specifically, it strikes when the lower esophageal sphincter, the band of muscle at the bottom of the esophagus—is too relaxed or weak.

This is why you might start coughing mucus a few minutes into a run to neutralize it.

To keep heartburn when running at bay, take the following steps.

Head to your local pharmacy and ask for over-the-counter medication for heartburn.

If this doesn’t help soothe your symptoms,  consult your doctor for more options.

Acid reflux is typically caused by eating certain foods in the hours—or night—before a run.

Some of the most common offenders:

Instead, eat plenty of food that aid in the reduction of acid reflux. These include:

Last but not least, Vocal Cord Dysfunction (VCD) is a less-known cause of coughing during running.

The condition occurs when the muscles in the larynx—the voice box—tighten and stay shut when you inhale.

Unlike EIB, this condition may force you to start coughing while running, as exercise triggers VCD.

You may experience tightness in your throat as well as wheezing when inhaling and a cough.

Usually, if you’re dealing with asthma, you’ll typically hear the wheezing on the exhale.

Your voice may also change or become hoarse, and you have difficulty breathing.

When it comes to running-related coughs, causes such as seasonal allergies, post-nasal drips, running in the cold can be easily managed on your own.

But if you’re coming down with severe VCD symptoms for an extended period of time, you should consult your doctor for a thorough medical check up.

According to my research, this condition isn’t treated with medication but rather with speech therapy.

During a VCD speech therapy session, you’ll be taught techniques and exercises which reduce the symptoms of VCD.

The vocal exercises are meant to soothe throat strain as well as finding the optimum volume and pitch for speaking. The exercises are practiced regularly so in case an attack strikes, and you can remain in control.

This not only will help you upspeak more clearly, but also decrease the irritants within your throat as well as breathlessness.

When To See A Doctor

Consult your doctor if you have symptoms of exercise-induced bronchoconstriction as well as Vocal Cord Dysfunction.

Plenty of conditions may trigger similar symptoms, which is why you need to get a thorough diagnosis.

You cannot treat what you don’t know. Right?

But if symptoms persist, you should consult your doctor.

Call a doctor right away if your caught is accompanied by:

There you have it!

If you often cough either during or after a run, then today’s post should be enough to guide you on the right path toward soothing what’s ailing you. The rest is really up to you.

In the meantime thank you for dropping by. 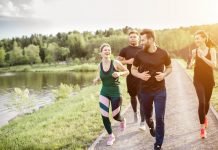 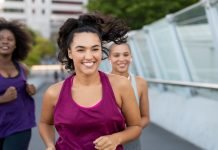